There are three main passions in my life: the love of art, of books and of travel. I regard myself as a very fortunate human being indeed as I have been able to satisfy all three while managing to make a living at it! I could say these three passions fed off each other, combining with my love of words and languages. Sharing all these with my many good friends and family is my greatest pleasure.

University studies took me to Germany and this was a fascinating experience in itself. While reading political economy, I also studied two languages apart from German. Later on in life, I added Spanish to the list and this opened an ever greater world of literature, culture and art to discover and make mine. Since childhood I had been fascinated by Indian textiles and embroidery. While in Germany I developed an interest in European techniques of embroidery, quilting and textile conservation. I took a variety of courses in these subjects but at that time I very much viewed it all as a hobby.

After completing my degree in political economy, I arrived in Britain in 1967. The plan was to stay in London for three months, travel briefly through Europe before going home, getting married etc… But soon I met my husband-to-be in London, he was Indian and studying for a PhD. Life took one of these turnings. All the careful planning was turned upside down and I realised that for the next foreseeable future, London would be my home. I had to think what to do with myself and decide on a career path. Soon, my love of books led me in the direction of publishing. I spent several years working in non-fiction publishing for a variety of houses at increasingly senior level. In the early 80s, I was a partner with what was known in publishing as a ‘packager’, i.e. a production company working in collaboration with standard publishers. This was a form of publishing very common in my field since the early 70s. In 1983 I decided that it was time to strike out on my own and start my own company. I greatly enjoyed my years as an independent packager, in spite of all the worry and stress. In later years I increasingly swerved into standard publishing as the economics of the industry were changing. Some five years ago, I sold the company and I can now go on collecting and reading my beloved books without the worries and tensions of producing some of them!

One of the best things about non-fiction publishing was the opportunities it gave me to meet fascinating people, to become interested in subjects I would not otherwise have come across and to travel widely. As a result I made a great variety of friends in America, all over Europe and Japan. I certainly put my languages to good use!

However back in the late 80s my love of art and of textiles had reasserted itself and I knew that I wanted to transform what had been a somewhat neglected hobby into a professional practice. I had done summer courses with art quilters in America and although interesting, European-style quilting was not what I wanted to do. I wanted to work with silk – a textile so richly represented in India. I always had a fascination for it and its reaction to light. I had also always loved embroidery, Indian and European, feeling that it could be taken a long way from its usual ‘decorative’ function and elevated to an art form, able to convey feelings and ideas. I had also discovered abstract art and I wanted to try to emulate the artists I admired: Klee, Kandinsky, Rothko and later on Cy Twombly, Hodgkin – to name but a few. At the same time, I wanted to preserve a strong Indian flavour in the work, without becoming ‘folksy’. A tall order indeed! My coming to grips with free-machine embroidery was a great liberation. I found that as I became more proficient at it, I could find my own way of working and produce bold strokes and great sweeps of colour. These had a spontaneity difficult to achieve with traditional forms of hand embroidery. By mixing hand and free-motion machine embroidery; Indian and European techniques, I could achieve the effects I was after. I felt that I had found my voice when I had the confidence to forget about ‘techniques’ and the textile bit to concentrate on the result and what I could express through the work. By the early 90s I began to create pieces I was happy with. It was no easy task combining the demands of publishing and making time to create and produce pieces, beside dealing with galleries and all the other tasks an artist has to keep an eye on if he or she does not want to produce work for the glory of it. To me, art is communication and there is no communication unless the work is out there, being seen, bought and lived with by other people. It was not an easy process but I hope that the ownership of the pieces I have created over the years has given many people as much joy as the creating and making of them have given me. The wonderful thing about abstract art is that while the artist’s intent is there, the onlooker can put his or her own interpretation on the work and be a ‘participant’. When talking to visitors during exhibitions, some will often ask if such and such was what I had in mind while creating a particular piece. I always reply that it is unimportant, what counts is the resonance the piece evokes in them. However, it also happens that another visitor will express the exact feeling that motivated me and it always is a moment of exquisite communication.

I had nearly ten years of struggling to combine two careers. I was on my own by then and, as I did not have anyone at home expecting me back at regular hours, it made it easier to cope with ever crazier schedules. It was obvious, however, that one of these activities would have to go, but a little like a man in love with two women, I could not bear to give one up in favour of the other. Slowly, however, the time came when I could let go of publishing and devote myself entirely to art.

We live in an age obsessed by speed and from conversations with visitors to my studio or at exhibitions, one of the most frequently asked question is: “how long did it take you to make this?” The thought that anyone would spend so many hours concentrating on a piece of work terrifies some people. I am always amused by that reaction as for me the time involved in finding the right way to express a feeling or an idea is the least important aspect of the equation. I actually love the slow process of getting the marks on to cloth, there is a meditative aspect to the work which delights me. Sometimes I feel that the marks happen almost independently of me and it is very exciting. Working through the night when the world sleeps is a great solace. For me it is also the best time to listen to classical music and be at peace with myself and the world.

As I was choosing images from early and more recent work for the retrospective featured on this website, I realise how significant some of these pieces were for me and how much they reflect the changing concerns in my life. I am now back at work with a fresh impetus after a difficult period following a bereavement and I feel all the enthusiasm and joy of creation coming back. I have done a lot of travelling during these three years, read very widely and I am myself curious to see how this will percolate through to the work. Watch that space – to use the popular phrase! 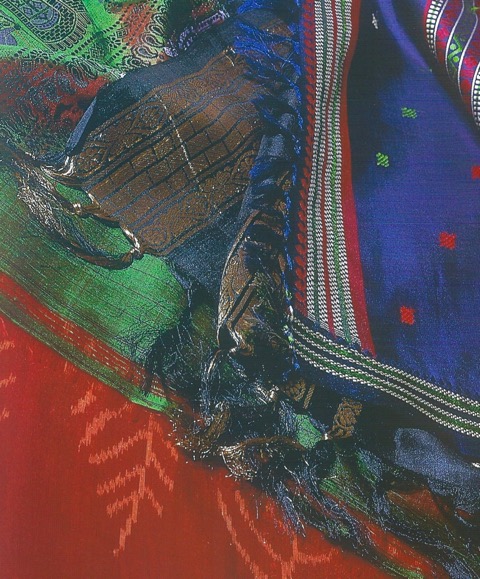 The magic of silk. Silk has a symbiotic relationship with light. It brings it to life, creating sculptural folds, changing colours in an endless kaleidoscope. 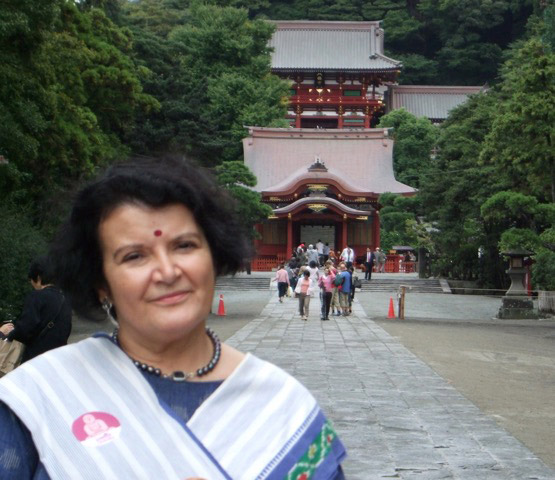 A temple in Japan. I spent one month in Tokyo during an exhibition in 2008. I visited Kyoto, then went to a magnificent mountainous area where a Japanese friend owns a house. Good that we did! Following the horrific earthquake in 2011, it would become difficult to reach it as it is close to the exclusion zone surrounding the stricken Fukushima nuclear plant. 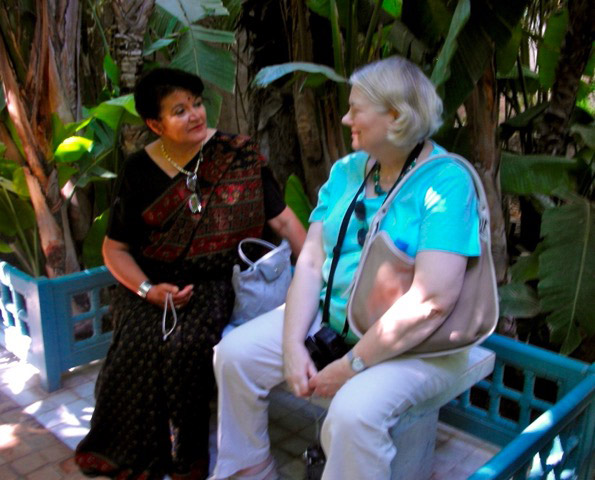 I have a great fondness for Morocco and am a frequent visitor there. This shot was taken in Marrakech’s Majorelle Gardens with my good friend Carolyn. 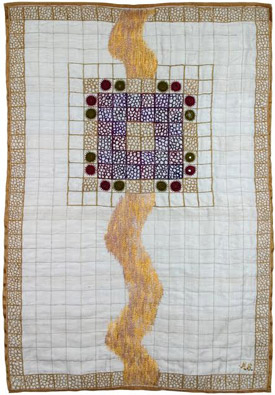 Yatra in Sanskrit means ‘journey’, in the sense of travel, but also to describe the one-way path we all take at birth. This work is one that I will never sell as it reminds me of some difficult times in my life but also of the feeling of renewal and increased strength experienced once life runs smoothly again. 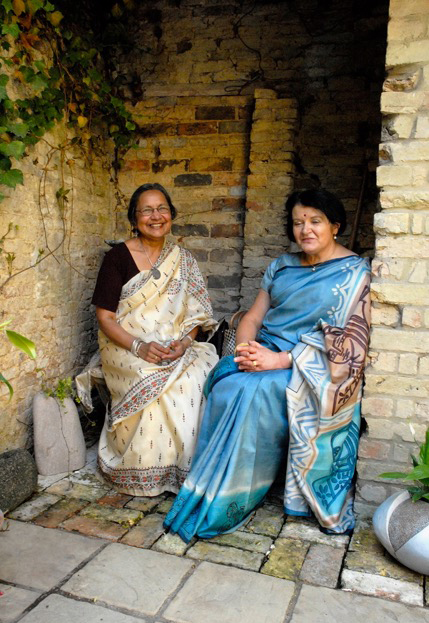 In Ely, Cambridgeshire, where I have lived and worked since 2003. My companion is my dear and much missed friend, Indu Patel, who fell a victim to cancer and left us all too soon. 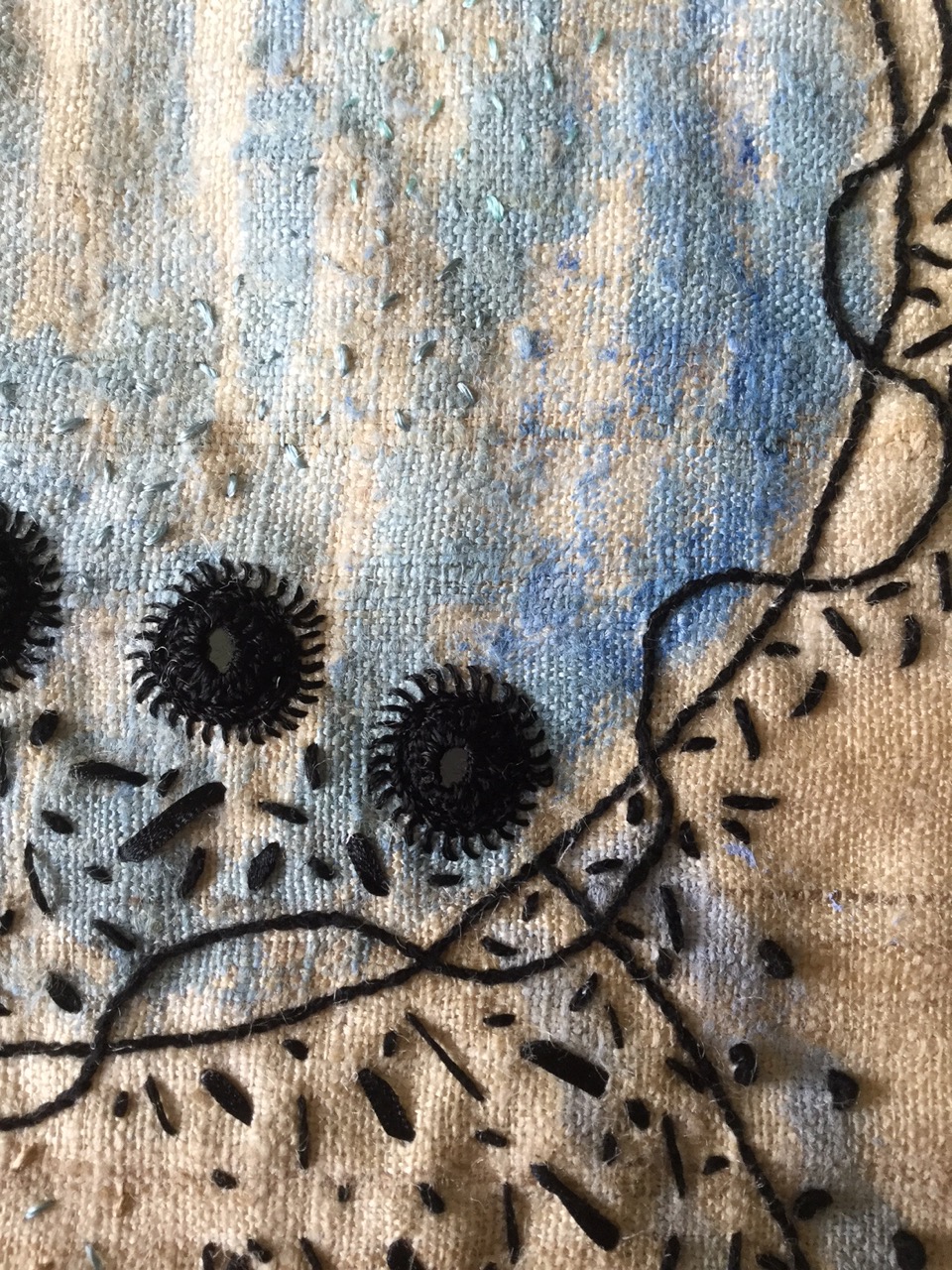 The Blue and the Black (detail from a recent piece) 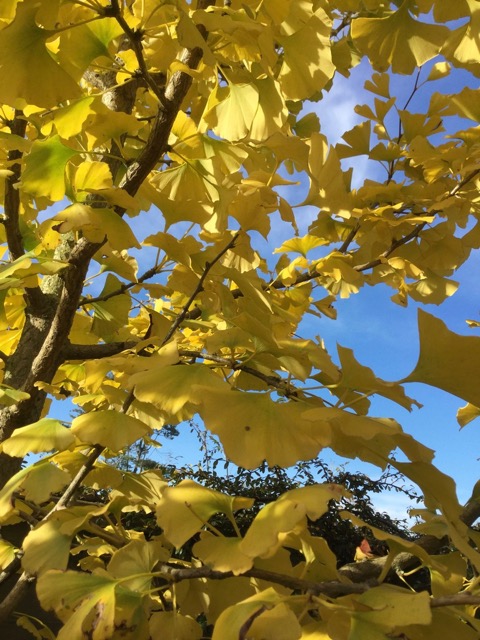 The ginkgo tree I planted in 2009 in the garden of my Ely house. In autumn it turns into a shower of gold. I have been much inspired by the beauty of the ginkgo and its symbolism.

One of the most ancient trees in nature, it is a symbol of longevity and hope in Japan. An ancient ginkgo grew near a temple. During the nuclear attack in 1945, the building which was close to the epicentre was completely destroyed. The tree, though much damaged, survived and a few months later the bare stumps burst into buds and leaves. It became a symbol of hope and renewal for the inhabitants. In due course the temple was rebuilt, encircling the precious tree like a horseshoe. I hope mine will long survive me and that it will be enjoyed by others in many decades from now. 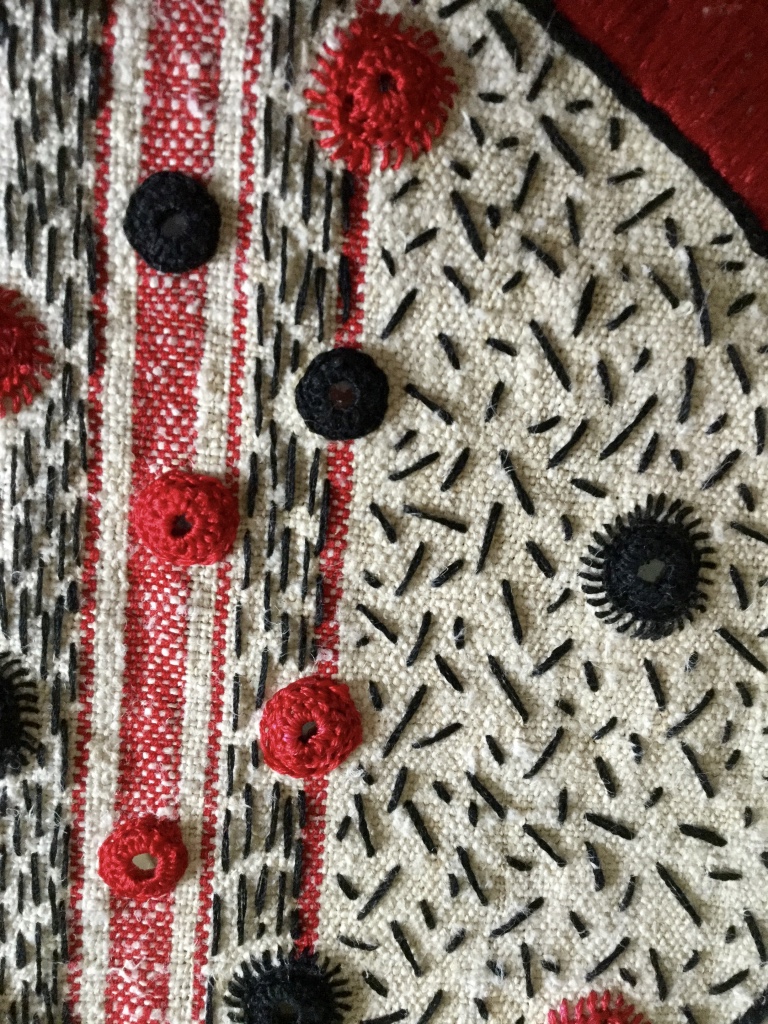 The Red and the Black (detail from a recent piece)